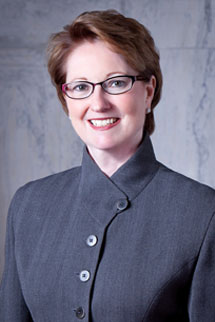 She worked in private practice from 1982 until 1996 at the six-person law firm of Segal and Davis, L.C. where she concentrated her efforts in the field of employee benefits and domestic relations. In 1993, Justice Davis became the first lawyer in West Virginia to be inducted into the American Academy of Matrimonial Lawyers.

In 1991, the Supreme Court of Appeals appointed her to the seven-person West Virginia Board of Law Examiners, on which she served until her election to the Supreme Court in 1996. She initially was elected to an unexpired term and was re-elected in November 2000 and November 2012 to full twelve-year terms. Justice Davis was the Supreme Court’s designee to the Judiciary’s Initiative on Truancy, and in that role she held dozens of public meetings to encourage collaborative community truancy programs.

In 2000, Justice Davis received the Distinguished West Virginian Award from then-Governor Cecil H. Underwood. In 2007 she led the West Virginia delegation to the National Judicial Leadership Summit in New York City, and she was responsible for the Court winning a competitive federal grant to initiate the West Virginia Domestic Violence Registry. In 2008 she received the Graduate of Distinction Award from the West Virginia Education Alliance. Under her guidance, the Supreme Court Administrative Office also received other major grants which have been used to improve the way the court system handles abuse and neglect cases.

Under her leadership as Chief Justice in 2010, the Court approved Revised Rules of Appellate Procedure, which modernized and comprehensively changed the appellate process in West Virginia to provide a decision on the merits in every case. The Court in 2010 also approved new Rules of Juvenile Procedure. In her previous terms as Chief Justice, she initiated a number of programs which proved to be essential to the Court’s continuing work with children and families, and that have allowed the Judicial Branch to remain current with the constant changes in technology. These initiatives include the Workers’ Compensation Mediation Program; the expansion of parent education programs; Rules on Mass Litigation; the expansion of courtroom technology, including the video initial appearance pilot project; the creation of the West Virginia Trial Court Rules; the establishment of an online Child Abuse and Neglect database; and additions to legal rules governing child abuse and neglect proceedings. In addition, Justice Davis expanded the Supreme Court’s outreach efforts by taking the Court for the first time in recent years to Wheeling and Charles Town, the beginning of what are now regular out-of-Charleston argument dockets and she established the LAWS program for high school students and the Robes to Schools program for all West Virginia school students.

Justice Davis retired from the Supreme Court in August of 2018 after having served as Chief Justice in 1998, 2002, 2006, 2007, 2010, and 2014, and is the only person to have served as Chief Justice six times. Justice Davis re-joined the Segal Law Firm in October of 2019 after her retirement from the Supreme Court of Appeals of West Virginia. She currently concentrates her practice in appellate issues and complex mass litigation.